Within Copenhagen exists a small hippy commune, Christiania. Although physical boundaries do not exist to separate Christiania from the rest of Copenhagen, there is a clear social border. Here we explore Christiania through the geographical lens of Borders, Meetings and Flows.

How do we define ‘place’ in a legal grey area?

The current (Feb 2018) exhibition at DAC (Danish Architecture Centre) identifies and explores social spaces through an understanding of borders, flows and meetings. Borders are how and where we compartmentalise areas into different spaces with predetermined labels, such as; nations, cities or neighbourhoods or personal boundaries such as work vs. home, safe vs. dangerous. Flows consider the movement of products and people into, out of and within a place. Meetings consider the congregation of people to share goods, ideas and each others’ company. I couldn’t help feeling that DAC’s exhibit failed to examine a perfect confluence of these ideas, right on their doorstep. Introducing Christiania, the alternatives’ Copenhagen.

Photos of Copenhagen or Denmark usually showcase their iconic style with lofty 6-storey apartments painted in elegant neutral tones and scarcely decorated, aside from a smattering of feature pieces.

Copenhagen is quiet, eerily quiet for a Londoner! The city is tidy and clean; a testament to Denmark’s considerate and thoughtful culture. Anyone who has visited will understand that the bins, and recycling system, are more complicated than Denmark’s transport networks.

Christiania is a small part of the Christianshavn neighbourhood. It was a military base overtaken by hippies in the 1970s to become a utopian bohemian district. The selling and use of Cannabis are illegal in Copenhagen, including Christiania, but the government and police have largely turned a blind eye allowing Christiania to become labelled the ‘green light district’. Christiania runs as a democratic community, which considers itself independent from Copenhagen.

Physical borders are increasingly threatening the flow and meeting of individuals, their locations often cause debate and are discussed across dinner tables globally. Trump’s wall is dividing North America in the attempt of eradicating all possibility of Mexican migrants venturing onto USA soil. History, particularly the Berlin Wall, has shown us the unjustifiable social impacts of when humans set up physical borders that exclude or restrict the movement of people.

Christiania is a place that is not appropriated by such physical borders but by a cultural mindset. There are several entrances to Christiania Freetown, but none require a passport and flow freely into the city. You may notice the splashes of colour from the extravagant street art, a DIY eccentricity, and a relaxed attitude. Christiania is not clinically clean, contrasting the majority of Copenhagen; instead, it is rugged, free-spirited and rough around the edges.

Outside wall (border) of Christiania

Although physical borders do not restrict entry to and from Christiania, a social boundary exists here; created by a shift in the cultural norm. The traditional buildings are rare here; instead, homes envious of Tiny Spaces and Grand Designs have been erected. Along the lakefront lie irregular hand-built homes (several resembling desperate attempts to build a structure from Lego- after your siblings have taken all the good pieces). The results- the homes are unique, striking, yet beautiful.

Christiania was created as a space within the traditionally elegant Copenhagen to allow the free-spirited Danes to express themselves without limit. The majority of Danes across the country nurture a Hygge lifestyle, a word for which there is no literal translation into English, the closest we can get is the idea of creating cosy intimate spaces for safe and warming activities. The mainstream Danish interpretation of this is candlelit cosy corners with snuggly blankets, where you read a book with a warming brew. An intimate space has been formed that allows residents to feel safe to express themselves honestly, inviting all to embark on intimate conversations- what could be more Hygge?

Gentrification is the moving out of one group of people for those with a higher income.  Evidence of gentrification is all over Copenhagen (just look for the closest Hipster cafe) especially in the inner city including Vesterbro.  Yet Christiania remains resistant as the residents continue to live amongst a sharing economy and a DIY lifestyle.

Christiania is extremely controversial as a ‘green light district’. Where the sale and consumption of cannabis-related products are done openly and casually. One clear example of ‘meetings’ is the congregation in the central square of Christiania where the cannabis is traded on an open market (known as Pusher Street). Here, signs were everywhere, indicating that photos were unwelcome (explaining my lack of visual prompts). Tourists who had previously visited had informed me that the traders kept their ambiguity by covering their faces with balaclavas. This was largely due to Pusher Street being closed after a vote by Christiania residents, invoked by 3 people being shot during a police raid in 2016. However currently (Feb 2018) traders openly show their faces and converse in a friendly manner. Perhaps now there is an increasing acceptance of the trade within the confines of Christiania from outside authorities or increased confidence from the traders. From a visitor perspective, it allows Christiania to appear more welcoming to all and less like the dark dirty secret of Copenhagen.

Though Pusher Street is a physical example of a meeting place, Christiania as a whole represents the meeting of like-minded individuals. Meetings attended by all residents, determine the decisions and planning for the district. Similar ‘hippy’ communities across the world often include an eco-friendly focus, seen through organic (and more recently) vegan dietary habits, liberal political views, freedom to express yourself and COLOUR. The hippy lifestyle is not new, but this commune supports each other under their shared ideologies and is arguably unique in Europe.

Murals and Street art cover almost every surface and the uniquely shaped homes include eco-features (such as grass on the roofs to increase evapotranspiration).  ‘Spaces’ are just the physical location with no social significance, whilst people and their experiences construct ‘places’. Christiania is a clear example of a hippy ‘place’ which has come into fruition, beyond the basic thrill of the open Cannabis use, but as an alternative society for those that the rest of Copenhagen feels inhabitable. 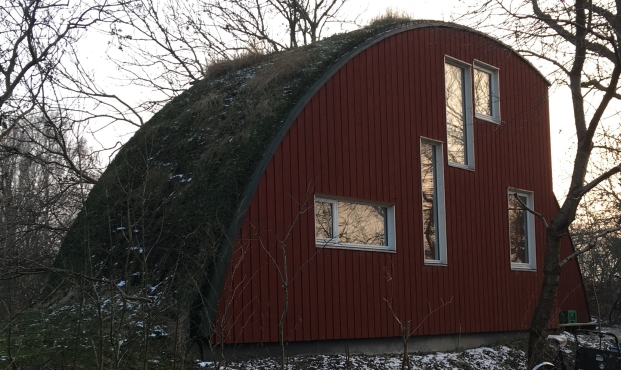 The flows into and out of Christiania include the norms: residents, workers, food and goods; but the biggest commodities here are tourists and the cannabis products. The tourists provide the clear income for the area with many cafes and shops to peruse. The paths around the lake, next to the band built homes, are well-trodden by Instagram-wannabes. How living within a tourist attraction affects the lives of residents, especially those who do not economise off the visitors, is unclear. But trying to raise a family whilst hoards of camera-carrying sightseers walk past your house cannot be ideal.   My understanding is that Copenhagen’s police have mostly allowed this area to self-regulate the drug trade, as long it occurs within their realms. However, to what extent Cannabis products leave Christiania and enter into Copenhagen’s wider circles is unclear. Regardless, it is transparent that to the residents of Christiania Cannabis is the only accepted drug, with many signs indicating ‘no hard drugs’.

Flows, like boundaries, do not have to be physical objects or people, but concepts. It is apparent that the flow of the Christiania mind-set is spread to its visitors and it resonates with them once they have left. Whether it is the self-sustainable urban lifestyle, the welcoming atmosphere or the attempt to bring colour and beauty to every possible surface, all visitors will leave inspired by the unusual life and world created here.

Christiania expresses clear examples of flows, meetings and borders. But which came first? The meeting of likeminded hippies prompted a social revolution. Later, when the edges of the realm had been determined, the flow between here and the outside world could continue again as the city accepted their rebellious counterpart. Without the strength of the combined mindset of similar individuals that continue to meet here, Christiania would collapse.

2 comments on “Cannabis in Copenhagen:”